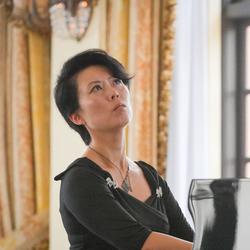 An international pianist and a recording artist with ten released albums, Makiko Hirata is “Dr. Pianist,” on a mission to promote the power of music to heal and unite us. In addition to her concerts, she collaborates with neuroscientists to quantify the benefit of music and promote music as an overlooked social resource through speaking engagements, workshops and writing. She is a US-Japan Leadership Program Fellow. Dr. Hirata has given recitals, lectures, concerto performances and outreach concerts in the Americas and Eurasia with ensembles and artists, such as the River Oaks Chamber Orchestra, the Pecs Hungarian Symphony Orchestra, conductor Leon Fleisher, and clarinetist David Krakauer. She has taught at New York University, Colburn Conservatory of Music, Rice University, and Lone Star College, and given master classes and lectures internationally.

I enjoy playing with every musician

It's impossible to pick just one influence - in fact, I believe that every encounter I get to have in my life - even a passing conversation with an audience - colors who I become and how I play. There was a ten-year-old student who once asked me why people like to listen to sad music. I think of her and her question that day regularly to this day, years later.

How to appreciate the vibrations you feel on the key surface as you play, and how appreciating that sensation can be the key, sometimes, to ground you in the here and now, liberating you in the music you are making.

I started when I was two-and-half. I was in Hong Kong, where some people spoke to me in Cantonese, some in Japanese, and some in English. When I started speaking, I could not finish a sentence in one language. I'd know one word in one language, another word in another language, etc. I became shy and withdrawn. I preferred playing the piano at home to going outside and playing with friends. My mom told me that music was a universal language. That means, she said, if learned to play the piano well, I'd be able to make friends anywhere in the world, regardless of differences in our language or anything else. That sounded good to me. It motivated my practicing!

I have a Steinway A at home. It's the instrument my parents bought for me when we moved to the States when I was thirteen, when I got into Juilliard PreCollege.

I'm a pretty happy person. Playing the piano enhances my happiness. I also like challenges.

The ability to play many, many notes at once.

Well I think - I love being with children. They remind me to focus on the here and now, and to feel what you feel, and to be honest about everything.

I promote music as a healing/unifying agent. I try to reach isolated/underserved communities with the power of music. When I feel like I got to make a difference in someone, that really moves me to want to do more. Also, I had some audience members come up to me and share with me about how hearing me led them, or their children/grandchildren to take up piano. That is also a very special feeling.

My first international tour in Bolivia as an eighteen-year-old with the country's national orchestra landed me on a stage in an arena in front of thousands of people, including official dignitaries. Playing at Tanglewood Music Festival was also big, in front of thousands. I also have played at Wortham Opera House in Houston, also large.

Bach keyboard works, for sure. I can't decide whether I should take Glenn Gould, or Keith Jarret playing. I hope I can take more than one.

I love to write. I loved writing my doctoral dissertation on the historical genesis of why memorization became a standard performance practice for pianists. I have been blogging for over a decade now, and have a bi-weekly column for a Japanese newspaper. I am finishing my third draft to my memoir on stage fright. I also love to hike, cook, travel, and to really get to know people.

I am a classically trained pianist.

reading, writing, hiking, cooking, and getting to know people and this world.