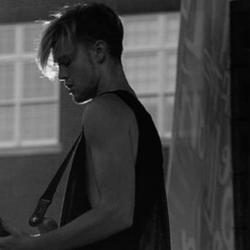 Originally from Columbia, Illinois, a small town outside of St. Louis, Missouri, Ryan Hoffman's music career began when he started singing and playing guitar when he was 14. After spending much of high school and writing music with bands playing rock, blues, jazz, and gospel music local to St. Louis, Ryan moved to Nashville, Tennessee after receiving the Presidential full-ride scholarship to attend Belmont University. The newfound opportunities while living in Nashville allowed Ryan to begin his career as a performing musician while attending college, having the opportunity to work with artists such as Stephanie Quayle, Cage the Elephant, and Maranda Curtis, as well as touring in Spain, the United States and Canada as a guitarist and music director for various artists before graduating in December of 2019. Since moving to Los Angeles, Ryan has enjoyed diving more into the recorded music industry while getting to know the city. He recently produced and performed in a number of music videos for Golden Globe and Emmy nominated actress Chrissy Metz. He continues to keep an active schedule of teaching, as music education has been a central part of his life for many years. He believes that the mentality of a lifelong student - carefree and eager to learn from their mistakes - is a key to unlocking the joys of both music and all life has to offer. In his free time he enjoys hiking, basketball, and good conversations with friends.

How to progress and grow while having fun! In this life, I worship positivity closely and believe that everyone has the ability to make their instrument fun - it just takes the right teacher and classroom environment.

Initially, watching my older brother play around the house inspired me to take guitar more seriously.

Humility - there were many times while living in Nashville that I found myself in the comparison game with other guitarists and musicians around me. Eventually I realized that most of my success as a musician is not based on skill alone, but the relationships I build with the musicians around me. To this end, I developed a mindset of humility towards music, focusing on the belief that we all have a song to song that is uniquely our own. Knowing this, I no longer became frustrated at the shortfalls in my playing, but inspired to find them and work on them.

I greatly enjoy being with kids, as they often overflow with joy and life lessons that can be learned. I find it is key to treat the child with the same respect all humans deserve; nobody enjoys being talked down to, and that includes children. Keeping a child-like nature in my life has made it easier for me to work with kids, being both comfortable acting goofy while maintaining focus on our musical goals for the day.

Opening for 21 Pilots - a band I remember saving money to buy arena tickets for when I was just a high school student growing up in St. Louis.

My family back home in the midwest (namely my one year old niece Charlotte) has always been an important staple for me. I also hold very dearly the education I've been fortunate enough to receive regarding music history, namely American commercial music history. Seeing the progression of musical ideas from early blues artists like Big Mama Thornton and Robert Johnson continues to fascinate me to this day.