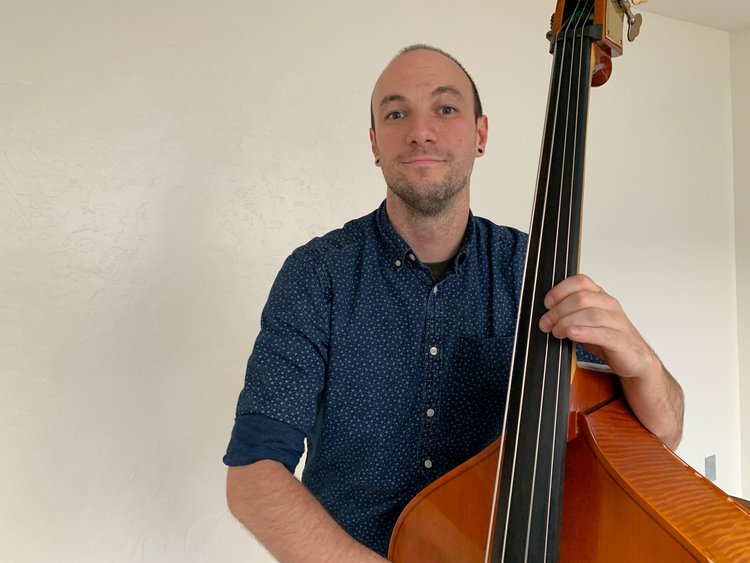 Tim first began playing music with the electric bass in junior high school and soon after fell for the upright. Early classical training made him a strong sight reader and instilled a solid technical foundation that informs his teaching today. At Berklee College of Music, he studied privately under Bruce Gertz and Ron Madhi building his jazz vocabulary and bowing technique. In 2011, Tim graduated Berklee with a Bachelor’s Degree in Music Education. He then completed his student teaching at the Middle School and High School levels in the greater Boston area, where he received his teaching license in 2012.  Post college, Tim toured the US playing Rock, Pop, Blues and Jazz and began honing his teaching skills outside the traditional classroom. Since then, he has relocated to Portland, Oregon where he has been performing, teaching, and recording everything from traditional bluegrass to Pop dance music and everything in between. While being a professional bass player, Tim also teaches guitar, piano, drums, and more, with students aging 7 to 77. He has taught in the public and private school systems, musical non-profits, as well as private lessons, both in-person and remote. His teaching ethos is to always draw inspiration from the sounds that his students are already listening to. Currently playing with an ever expanding list of musicians and groups in the greater Portland area; whatever the music, Tim strives to make people stand up and dance. He believes it's called "playing" an instrument because it shouldn't feel like work.

I have really been enjoying Vulfpeck recently. I also think it would be fun to play with Hiatus Coyote. If I could time travel... Miles Davis.

I have spent a lot of time listening to Miles Davis. I love how his sound changed throughout his career but the clarity of his ideas is what really excites me.

I excel at teaching people how to play music with other people. My students are capable individual players but are also sensitive, flexible musicians in a group setting. Making musicians who are comfortable improvising and creating on the spot to lift the band up is a top priority.

I was lucky enough to start lessons with a working musician at 12. He taught me how to play my bass but also what other musicians need from a bass player.

I try to think slowly and logically when practicing. I love to take an exercise that I know and create 3 new ways to play through it. I'll play it backwards, descending, with different rhythms or anything to get new perspective on something that I already understand.

I think that Bass players are the glue between Rhythm and Harmony. We connect the Drummer to the Piano/Guitar. I think that this is a very special position of influence but also requires us to be fluent in both languages. If the drums are the motor of the band and the guitar is the steering wheel then we are the bus driver.

I work great with kids! I am a firm believer that we PLAY instruments and that it should feel like that. Some students goal is to acquire great skill and accomplishment from their instrument and some only seek exposure to a new craft for themselves. Both are totally viable and deserve our full support.

In recent days, I have been pursuing composition and arranging with a new fervor. This is something that I didn't pursue nearly at all early in my career. The feeling that I get when I hear a piece of mine played and knowing that it came directly from my brain is amazing. It makes me feel connected to something bigger than myself and I feel grateful to have been given the idea. I feel a part of the community of musician in that the piece can live on past me and can provide something to a stranger also.

I have toured across the US and played some big stages before. Highlights would be Fenway Park, Austin City Limits, The Cosmopolitan in Las Vegas and smaller but special to me, Mississippi Studios here in Portland!

I am an avid table tennis (ping pong) player. I am in a league and usually play 3 times a week. I also own 3 lizards. I really enjoy the idea of living with dinosaurs and you would be surprised how much personality they have.

Rock (from Pop to Heavy)FolkJazzClassicalWorld Musics

7-77 years old and beginner to advanced.

I currently play with a large group of musicians around Portland including: June Magnolia, Haley Heynderickx, Ben Woodman Trio, Jesco Payne & The Payne Killers and the occasional gig under my own leadership X Quartet.

I am a freelance bassist so I record remotely for music projects all across the country. I hope to release an album of my own tunes within the year.